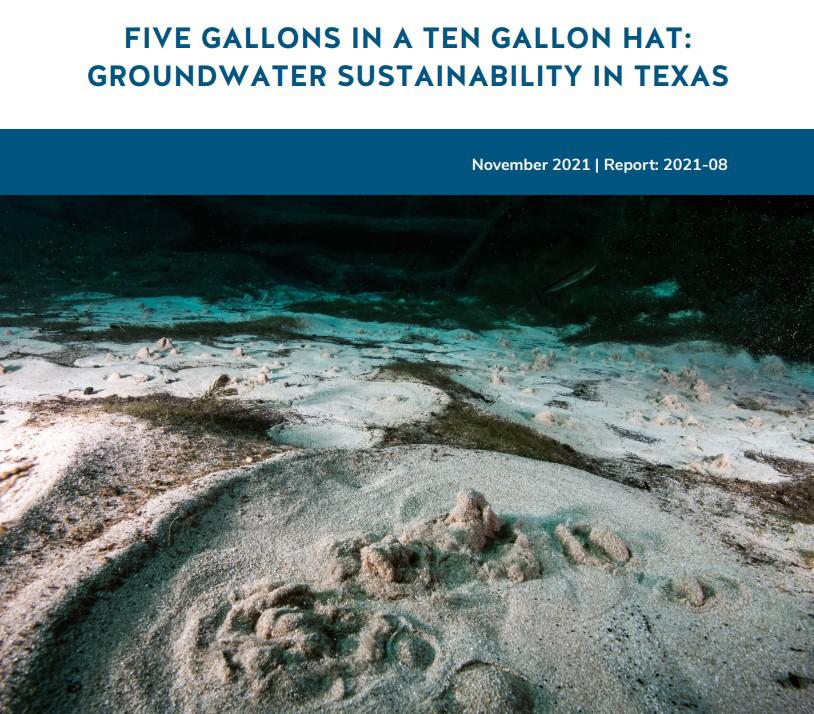 The future of groundwater pumping in Texas is not sustainable

The future of water looks murky in the Lone Star State.

Groundwater levels are dropping in Texas, according to two reports released last week by Texas State University and the Environmental Defense Fund. Seven of the 20 aquifer systems analyzed in the state are overexploited, and that number could double by 2070, leaving just six sustainable aquifers for future groundwater use in the state.

Unsustainable pumping of aquifers can cause wells to dry up, decrease groundwater storage, and degrade rivers and springs that depend on aquifers for their ecosystems.

“We are going in the wrong direction,” said Vanessa Puig-Williams, director of the Environmental Defense Fund’s Texas Water Program. “In Texas, none of us want to see our aquifers run out or become unavailable as a source of water in the future. And unfortunately, we have made the decision to allow our aquifers to be pumped beyond what is sustainable.

Groundwater conservation districts, which manage local aquifers, don’t practice sustainability to the extent that they should, Puig-Williams said, with many districts pumping more than they can handle in the long run. And while some districts – such as the Clearwater Underground Conservation District, the Barton Springs District, and the Edwards Aquifer Conservation District – have good management practices used to maintain spring flow, groundwater in Texas is highly connected, which means that the supply of one aquifer can impact another.

On ExpressNews.com: Drought conditions have eased in San Antonio – but relief is likely only temporary

For the Edwards Aquifer, groundwater is protected by the Endangered Species Act, which limits the amount of water pumped in order to protect creatures such as the Blind Salamander and the San Marcos Gambusia. Currently, the Edwards Aquifer is sustainably pumped and will continue to be pumped in 2070, according to the Texas State University report.

But the Edwards is connected to the Trinity Aquifer, which stretches north of San Antonio through Texas Hill Country.

“Most of the recharge to the Edwards Aquifer comes from rivers across the recharge zone that flow into the aquifer, and then most of that water flowing into these rivers is a source for the Hill Country, “said Robert Mace, professor at Texas State University and executive director of the Meadows Center for Water and the Environment. “But there is also water flowing underground from the Trinity Aquifer in the Edwards, so if there is less water in the Trinity, there will be less water flowing. in the Edwards. “

While the Trinity Aquifer as a whole should be managed sustainably in the future, the Trinity in the Hill Country is not, Mace said. Trinity’s groundwater levels are expected to drop 30 feet by 2070.

If that happens, there will be less water for pumping in San Antonio, and the city will need to impose drought restrictions more frequently to ensure the Comal and San Marcos rivers continue to flow.

The Trinity is like a leaky tub, Mace said. The tub faucet fills it while a certain amount drains for the spring runoff, and there are leaks on the side of the tub that drains to the Edwards, which drains it faster than it does. another aquifer. In order to pump Trinity sustainably in the future, management plans must take these leaks into account.

“Aquifers are a lot more complicated than just recharge and drain,” Mace said.

Meanwhile, other aquifers, such as the Ogallala under the Great Plains, are of more concern. According to the Texas State University report, the Ogallala is pumped at a rate 6.5 times faster than it is recharging, and this area could start to seek water elsewhere. So healthier aquifers may need to export water to thirstier parts of Texas. Already, there are parts of the Ogallala where people can no longer pump economically, as overpumping has depleted groundwater supplies.

But there is good news, Puig-Williams said, as the Texas legislature has given groundwater conservation districts the authority and flexibility to manage groundwater sustainably. Chapter 36 of the Texas Water Code gives groundwater districts the command of planning and regulation to preserve and protect Texans’ resources and property rights.

“We are talking about managing groundwater in a way that ensures aquifer levels are maintained in perpetuity, but without causing unacceptable environmental, economic or social consequences,” she said.

For example, agricultural and agricultural areas need water for irrigation. So conservation district officials in those parts of Texas could limit new groundwater production in certain areas during drought, Puig-Williams said, or work with farmers to grow crops that require less. water.

All the while, the springs would continue to flow for wildlife, keeping the habitat healthy.

“We have the framework to build on groundwater conservation in Texas,” Puig-Williams said. “Districts can choose to manage groundwater sustainably, and they just need to take the necessary steps to do so. “