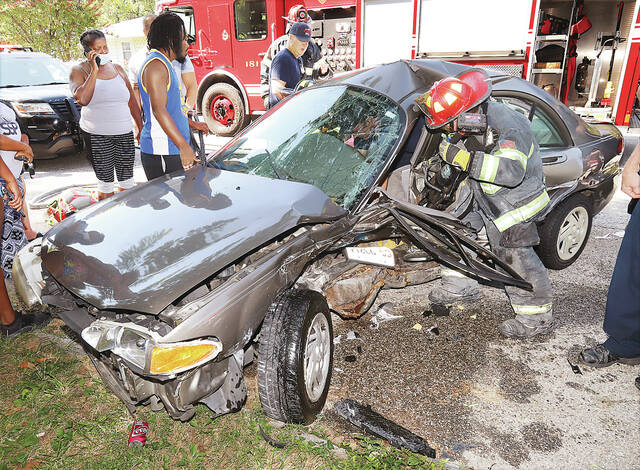 ALTON – Firefighters responded to a serious accident Monday at around 11:20 a.m. in the 1200 block of Central Avenue in Alton.

The driver of a Jaguar XF struck the driver’s side of a Ford Escort, pushing the driver’s side and trapping the Escort driver’s leg in the wreckage. A large crowd of neighbors, friends and the trapped woman’s family gathered to watch rescuers use a hydraulic rescue tool to free the woman from the twisted metal.

The proximity of the Jaguar’s engine to the pinned victim was inconvenient for the fire commanders at the scene. Alton firefighters had a flexible hose on hand in case a fire broke out. Police and firefighters managed to push the Jaguar back, exposing the driver’s side of the Escort.

ARCH Air Medical Services, Inc. was called in to land at St. Anthony Medical Center to transfer the woman to a St. Louis hospital. Firefighters managed to free the driver at 11:54 a.m. Monday and rushed her to meet the air evacuation helicopter.

Alton Police Chief Marcos Pulido and officers from the department’s traffic division were at the scene to initiate an investigation into the cause of the crash. The driver of the Jaguar appears to have escaped serious injuries.

Police did not release the names of those involved in the crash on Monday.